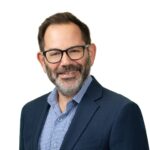 As a general matter, I am not a joiner. No fraternities or clubs for me. On the rare occasions I am not working, I like to be home, with my family and my coffee or bourbon (depending on the time of day).  That is my happy place.  However, for those of you who know my wife, Nicole Sidman, you may not be surprised to hear that sometimes, I am occasionally conscripted into community. And I am always the better for it.

Before Nicole became Social Justice Outreach Coordinator at Temple Beth El, my involvement in the temple was centered around holiday observance, occasional Shabbat attendance and my son’s Jewish education. When Nicole began to work at Temple Beth El I was of course interested in her work and was excited to learn more. The first thing I did was sign up for the 2021 listening campaign “From Social Distance to Social Action,” kick-off. Then, I participated in a virtual house meeting where several congregants, none of whom I knew, shared their stories around the pandemic, loss and inequities in our society. After over a year of the pandemic, I was reminded how good it could feel to connect to people.

When the issue teams were formed, I was invited to join the Income Inequality Team. Although my job as a commercial real estate lawyer doesn’t provide for a lot of free time, I decided to step out of my usual routine and join something. Little did I know that my job would be the key to making a difference. While working through the many complicated issues surrounding income inequality, our team was asked if we would be willing to shift our focus to help the influx of Afghan families arriving in Charlotte after the US withdrawal from Afghanistan. Our team jumped at the chance. Many volunteered to set up apartments, coordinate donations and work directly with the families. But there was one project on which I was particularly qualified to assist. Through the generosity of a TBE family, an Afghan family would be able to rent a home, with the congregants serving as the lease guarantor. Working closely with the Jewish Community Refugee Initiative (JCRI) and the Carolina Refugee Resettlement Agency, I helped draft documents to put the legal “scaffolding” around a program to create a reimbursement mechanism for these guarantors and others willing to serve in that capacity, to greatly reduce their risk of monetary loss.  The reimbursement fund was seeded with contributions to JCRI raised at last fall’s “Welcoming the Stranger to the Table” zoom event (much of which came from TBE congregants).

While this was going on, one day Nicole approached me with what was, at the time, a mysterious question.  “Hey, do you want to join a TriBE?” Having no clue what a TriBE was and given my general aversion to groups, no one has been more surprised than I at how much I look forward to our monthly meetings. Our TriBE, Vino & Vinyl, is made up of 13 congregants – people at various stages of life, none of whom I had ever met before, and many of whom I would probably never have met. We have formed close bonds, evidenced in real time through a group text keeping one another posted on our lives and supporting each other in between our gatherings. We coordinate around mitzvahs, services and temple programming, as well as dinners, drinks and family happenings.

Whether through community action with the Temple or the small group friendships I have made as a TriBE member, these new connections have helped expand my idea of what Temple can be, helping make this large congregation feel intimate and Charlotte feel like home. The idea of combining social action and social interaction, intentionally connecting small groups of congregants around shared Jewish values of social equity and justice, feels like a natural transition that will highlight some of the best of what Temple Beth El has to offer. To imagine I could come through a pandemic feeling more connected and more engaged speaks volumes about these initiatives and the exciting prospects ahead.

To learn more about our Social Justice & Action TriBE initiative, please sign up for one of the Small Group Visioning Workshops or contact Nicole Sidman or Andy Harkavy.

We are excited to welcome Rabbi Lexi Erdheim as our new Associate Rabbi. As a member of our team, Rabbi Erdheim will have a full

As a general matter, I am not a joiner. No fraternities or clubs for me. On the rare occasions I am not working, I like