Temple Beth El joins Fred and Joy Miller in remembering their daughter, Michelle, whose 20th yahrzeit was marked in April. We are honored that the Millers have chosen to honor Michelle’s memory through the Michelle Miller Award for Jewish Commitment, which is presented to one or two Temple Beth El confirmation students every year. We invite you to join us for Confirmation, including the presentation of the Michelle Miller Award, on Friday, May 13 at 7:30pm. The following piece, sharing memories of Michelle and the history of the award, was written by her parents. 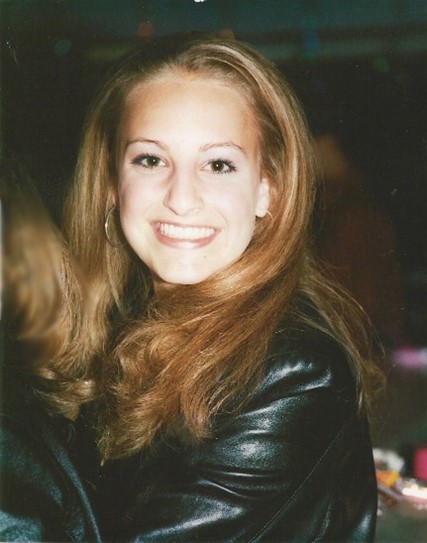 Michelle was very mature, pragmatic, sensible, introspective, and very funny. She made us laugh all the time. She had a diverse circle of friends from her confirmation class, her BBYO chapter, her dance studio troupe, and her secular high school class. Michelle was very dedicated to Judaism and her Jewish friends at Temple Beth El and at BBYO, both in which she was active. She often educated her non-Jewish friends regarding misconceptions they held about Judaism. We called her “our little Jewish ambassador.” She always included her non-Jewish friends in our home worship of the Jewish holidays. Michelle’s favorite quote was from “Dreams” by Langston Hughes: “Hold fast to dreams, for if dreams die, life is a broken-winged bird that cannot fly.”

Part of the confirmation class curriculum included a section on comparative religion; this included learning about other faiths and visiting other houses of worship. One of the houses of worship the class visited was a mosque, which the family of one of her good high school friends attended. Her friend told her that he rarely attended services. She asked him why, and he said, “Michelle, they all take off their shoes, and it stinks.” Michelle had been very moved by the service at the mosque, and she told him she did not notice any unpleasant odor and therefore reprimanded him and told him he should attend the services at his mosque.

Michelle and her class were planning to visit New York City for their confirmation trip, but this trip followed the events of 9/11, and people were apprehensive about visiting New York City. Therefore, the students decided instead to visit Charleston, South Carolina, and visit the Jewish historical sites there.

In her obituary, we requested that in lieu of flowers, people send donations to Temple Beth El in memory of Michelle. The Temple Beth El community responded generously, contributing so many donations in memory of Michelle that a fund was created. We and Rabbi Bennet (Temple Beth El’s senior rabbi at the time) discussed what we should do with the donations, and we decided to make a scholarship cash award in Michelle’s memory to an outstanding confirmation student or students from each confirmation class. And so the Michelle Miller Award for Jewish Commitment was created. We later made the fund an endowment to better help the fund achieve its goal of granting a scholarship award every year.

Since 2003, one or two scholarship awards have been presented each year. Our family honors Michelle’s memory each year through our annual participation in the confirmation service and the presentation of the award. It always is inspiring and comforting to present the award to bright young people who are as committed to the Jewish community as was Michelle. Over the years, students have used the money to attend summer Jewish leadership camps, to help pay for trips to Israel, and to further their Jewish education. One student even used the money to attend a cantorial preparation program. Another student donated half of his award back into the endowment. None of the students have used their awards frivolously.

PrevPreviousIn Moments Like These, Judaism and Your Clergy Are Here for You
NextConfirmation Class of 5782Next